I suffer from Intractable Cluster Headache Syndrome (Trigeminal Autonomic Cephalalgia). I have had this illness for four decades. It is a very rare and extraordinarily painful condition. My faulty hypothalamus causes the blood vessels in my brain to swell and squeeze the fifth branch of the trigeminal nerve. This causes multiple attacks each day of excruciating facial pain around and in one eye. Imagine an ice pick boring through your temple and a finger pushing your eye out from the inside while the back of your head is hit with a blast of a shotgun. All on one side of the head. My eyelid droops and tears up. My nose runs and gets clogged. My tooth feels like it is falling out. My temple and around my eye swells and turns red and my face droops on one side like a stroke. I find it difficult to speak, my digestion often stops, and I have to rock in my chair because laying down makes the pain even worse.

To treat it, I am on a preventative that helps ease pain and number of attacks each day. I take an injection and hyperventilate on 100% oxygen to constrict the blood vessels around my brain. I use lidocaine on my temples, straight liquid capsaicin in my nostril, melatonin to stop nighttime attacks, and Boswellia Serrata to reduce overall inflammation.

Cluster Headaches are also called “suicide headaches” because people have killed themselves to escape its wrath. I belong to a small support group on Facebook. One year we lost 14 members to suicide. The pain and incessant attacks are just that bad. It is known to be the most painful condition known to medical science, worse than natural childbirth, burns, and broken bones.

Recently, I began a new treatment. The first of its kind that is for my specific illness. It is a once a month set of three 100mg shots called Emgality. It is also for chronic migraines, a very different illness that is much more common. Migraines effect about 13% of the population while CH (Cluster Headaches) affects about 0.1% of the population. In my lifetime I have only met 2 other sufferers in person, one of which is the doctor who diagnosed me.

I took my first shots of Emgality on July 26th. At first, I struggled with the same amount and intensity of attacks but the timing of them was off. CH attacks tend to occur in a cycle around the same time of day depending on the month and time of year. After about 7 days my attacks became fewer and less intense and more easily treated. Up until the 16th of August I was having only one or two attacks, some of which were so mild and brief I did not need medication. This was a huge change from 4-5 painful attacks a day. On the 12th I had NO attacks at all for the first time in about 3 years. From the 16th to the 21st I was struck with 5 attacks a day…all were excruciating and difficult to get under control, especially in the evening. I cried A LOT. Now I am back to enjoying more pain free time and easily treated attacks.

On Friday night as I suffered through the evening I told Jay come hell or high water I want to go out kayaking tomorrow afternoon. And I meant it. I needed the relief and some sunshine after spending the week sick and inside. We recently bought inflatable kayaks and all the gear necessary to enjoy the local lakes and streams. We went to Beech Fork Lake and settled in. Jay fell in the water trying to get on his kayak giving me belly laughs! We paddled around the quiet lake enjoying the warm sunshine and wildlife. It was heavenly for me. I was so relaxed. I got an attack and treated it while in the middle of the lake. I just floated around till it eased. We had to paddle in because more attacks were to come. Overall, I enjoyed myself immensely, got some exercise and got out of the house.

I have my next round of Emgality shots on the 27th. I am hoping to have an easier month but the medication doesn’t reach its full effect till month three. So you have had a little look into my life and the condition that disables me. I pray I am like some of my support group fellows and have complete relief some day. With this illness I have learned to live between the pain. I cherish the times that my head is as clear as a bell in between attacks. Some days are better than others. Sometimes I just have to take the day off. But no matter what I try to live a life worth living as an artist, a wife and a friend. We all have hurdles to overcome but life was meant to be lived with purpose and love and I try to fulfill that everyday.

I hope you share this post…there are sufferers out there that do not know there is a solution to this rare disease.

In my next post, I will showcase my newest works! 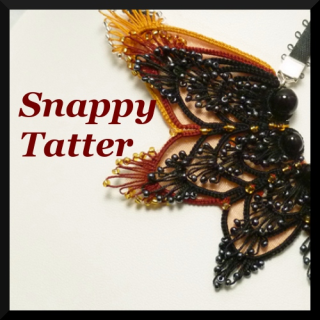 Welcome! I design original works of tatted lace jewelry, small fiber art works and embroidered paintings. I also paint using Corel digital software and draw Mandalas for coloring or decorating. I am an embroiderer, a painter, a sculptor and shuttle-tatted lacemaker.